Space combat is the principal element of warfare in Master of Orion. Enemy ships face off in space and fight until one side either retreats or all of its ships are destroyed. 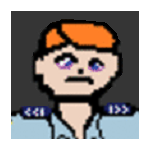