Silicoid are one of the major civilizations in Master of Orion.

The Silicoids are a race of rock-beings. They are immune to the effects of waste and can land on star systems with any type of environment. Silicoids do not benefit from fertile or gaia environments. Due to their crystalline nature, Silicoid populations grow at only half the rate of other races.

Even though the Silicoids already possess many of the planetology tech advantages, Silicoid players cannot ignore planetology altogether. Planetology is necessary to expand the size of planets, and the additional production bonus is always important.

The Silicoids are an incredible oddity; they're the only known sentient crystalline life form. These strange beings are lithovores; they eat minerals instead of food. Silicoids are environmentally tolerant, and thus can support a greater maximum population on nearly every type of world. They also spend no effort to clean up pollution, as it has no effect on them. They do, however, have an extremely low rate of reproduction, 50% below galactic standards. Their unusual chemistry also affects their ability to communicate with other races; Silicoids are considered repulsive by all other sentient species. The Silicoids have a Dictatorial government.

Curiously unique, the Silicoids represent a true divergence from other life and its origins in the Orion Sector. They are believed to have come about from the shards of a giant sentient crystal that was destroyed above their home planet. Each Silicoid begins as an asexually created shard, incubated in a nutrient bath, and eventually grows into an individual with all of the prior knowledge of its “parent”. This efficiency comes at a cost of speed, however, so forethought and careful planning are key to any successful Silicoid society.

Stern and stoic, the Silicoids are a repulsive race of mineral-based creatures who absorb the minerals from planets. They make the other races of the galaxy uneasy, even though the Silicoids’ dreams of conquest are difficult with only a meager population to support them. Able to withstand high heat and gravity, the Silicoids can settle many worlds the other races find to be inhospitable.

Alone in their unique composition, the Siliciod are an ancient race of silicon-based life forms from the planet Cryslon.

Their impressively long lifespans and abysmally low birth rates have resulted in a civilization of relativity few individuals with lots experience. The oldest among them is known as the Keystone, ruler of the Silicoid and speaker of the Crag.

As outcasts among other alien races, they see other races as fleeting, temporary blurs that leave nothing behind but trouble for the Crag.

The Silicoid are a mysterious and inorganic race with no emotion, sentimentality, or feelings. Other races find the Silicoids to be repulsive and creepy, shunning contact or conversation with the Silicoids unless it cannot be avoided. The Silicoid people, referred to as the Crag, are led by a Keystone which acts as a dictator in their society. Silicoids run their society on an elder-respect basis, with the oldest of the Silicoids serving the Keystone.

The Silicoid home world of Cryslon is dominated by unique mountain ranges. Cryslon is especially valuable to the Silicoids, as they can only be grown at the Sacred Basin of their home world. Their population growth is precarious, often hovering near zero growth due to the long process it takes for Silicoids to grow. When Silicoids die, they are brought back to the Sacred Basin where they fall into the mineral-rich waters and erode back into the materials which grow new Silicoids. The only clues that the Silicoids have of their origins are the same, dim genetic memories which they collect from their common birthplace.

A crystalline being of unknown time or origin shattered and fell into the mineral-rich basin of ancient Cryslon. From this accident, the rock structures grown in this specific region gain the spark of life and bring their inorganic bodies into a state of awareness and consciousness. Silicoids are driven by a single force: the need to consume the minerals of planets. The conquer planets with their limited population solely for the purpose of stripping them of the valuable minerals which Silicoids need to survive. They are obsessed with the need for consumption and it is their only understandable motivation in intergalactic affairs.

The Silicoid have long watched the universe unfold from their ancient seat of Cryslon. Inorganic mineral-based beings with a low population count, the Silicoids will go to extremes when faced with threats to their people. They are an unknowable enigma in the already diverse and curious universe. They are not bound by the conventions of organic life and have no need for traditional means of sustenance. Whether they seek domination or a peaceful and solitary existence is up to the player, but the Crag will serve their leader as they have for thousands of years. 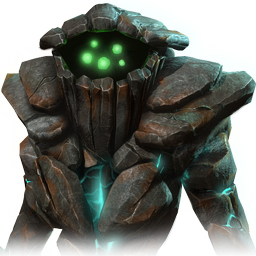 The Keystone of the Crag is pulled from the Sacred Basin and chosen for the role it will play in society, just as any other Silicoid is. There is no pomp and circumstance around the role; it is simply a job that must be done. The practicality and emotionless detachment of the Silicoids make the Keystone a particularly bizarre participant in galactic relations. There is no subterfuge or complexity in dealing with the Silicoids—there is only the bare minimum of interaction and the demands of the Crag. The Keystone finds no glory in the role and treats it the same as any other mandatory role in society.

Fulcrum Sandebar is one of the eldest known functional Silicoids. She uses the expertise of her wisdom to guide the Keystone, who is much younger. When Fulcrum was pulled from the Basin she was assigned to the role of Scientist, spending decades in the heart of Silicoid society researching communication patterns among her people. As Advisor, she is well versed in the social and diplomatic relations that are a struggle for most Silicoids. She is well respected by her peers and considered a major asset to the reign of the current Keystone.

Resonnor, the capital city of Cryslon, is where the Sacred Basin and the seat of the Crag government are located. Tall columns of stone rise from the land as if some disruptive and terrible force had shoved them from the planet’s crust. Silicoid beings move soundlessly down the streets without communicating with each other, the city operating in almost total silence. Resonnor is the most highly fortified location in the Crag’s empire, and if all other bases were to be sacrificed, it would be to save this crucial city.

The Silicoids are shoved onto the galactic stage because of their insatiable need to consume minerals that Cryslon cannot provide. They must plan their movements across the galaxy with care, always keeping an eye on the planet that gave them life. Their presence in the universe is unique and must be preserved at all costs—even as their hunger pushes them to the edges of known space.

Silicoid ships, similar to Klackon ships, are a combination of grown and built parts. Silicoid ships are developed from raw ore and materials and then enhanced with mechanical parts to facilitate high-speed travel. The frigate-class ships are the smallest of the fleet, often using a single crystalline structure as the foundation of construction.

Destroyer-class ships of the Silicoid fleet are straightforward in their construction. Every aspect of the ship serves a specific purpose and the Silicoids care not for superfluous design. The crews of Silicoid ships are minimal in comparison to other races, with individual Silicioids plugging directly into the ship and overseeing whole programs seamlessly. Bravo designs of the ship are more mechanical than mineral-based.

Cruisers of the Silicoid Crag are marvels of engineering. The mineral-based segments of the ship respond directly to the Silicoids’ consciousness and the constructed versions have learned to follow the same commands. These ships are hyper-dense in formation, making them especially tough to crack. The alternate designs for the ship encase mechanical parts protectively within the mineral shell.

Silicoid battleships are as unfeeling and ruthless as the Silicoids themselves. The integration of machine and mineral hits its peak with this design, seamlessly transitioning between natural and constructed systems. Bravo designs are more defensively oriented, with less exposed crystal.

Titan-class ships of the Silicoid armada are formidable in offensive and defensive capabilities alike. Foes of the Crag dread the sight of these mighty ships crossing their horizons, as widespread destruction is sure to follow. Bravo models of the titan are impressively self-contained, similar to a geode.

The Silicoid fleet embraces the geode growth structure of the doomstar. All systems are internal facing, leaving the exterior surfaces unadorned and almost invulnerable to damage.

The Silicoid traits cost a total of 18 points, a combination that would be illegal as a custom race (10 points maximum). In addition, Tolerant is a hidden perk, not normally accessible for custom races.

Build a lot of ships