Psilon are one of the major civilizations in Master of Orion.

The Psilons are a brilliant, unemotional race devoted solely to hard logic and the quest for knowledge. Their superior minds and research techniques allow them to gain a +50% bonus to all their research efforts. They can also select from a greater number of devices to research than other races.

Psilon players should invest heavily in research, then guard their discoveries with high internal security. Technological advantages should be used as quickly as possible against more primitive races.

The Psilons are a delicate race of brilliant researchers from a Low-G homeworld. Each Psilon scientist produces 2 more research than the galactic norm. In addition, the Psilons are very creative, and they never ignore a potential avenue of research. Thus, all technologies are available to their scientists. That ancient artifacts are plentiful on their home world doesn't hurt. Peer review and tenure squabbles have prevented them from achieving a form of government more advantageous than a Dictatorship.

The Psilons have always been devoted to the pursuit of knowledge, a devotion that borders on fanaticism. During the Dark Age, in exchange for favor from the Antaran overlords, the Psilons willingly allowed the Antaran geneticists to experiment on and manipulate their bodies to increase their capacity for learning and research. The Psilons of today are the result of centuries of horrific genetic reconstruction: mentally powerful, but with their bodies weakened to the point where they must use hover chairs to move and mechanical waldoes to physically manipulate items in their world.

Brilliant researchers who devote their lives to science, the Psilon are reclusive geniuses who are physically small and weak. Their peaceful nature is only shadowed by their crippling paranoia that other races will steal their research and technology. They are creative and efficient researchers who are gifted with all technologies.

Under the supervision of the Controller at Mentar, a sprawling network of Psilon communities comprise the Quanta.

Devoted to unraveling of the mysteries of the universe, each Quantum investigates independently in order to contribute to the knowledge of the whole.

The Psilon are a peaceful race, and only keep fleets of highly advanced warships as defensive measures.

Brilliant researchers, they are often ahead technological race, yet seldom seem to take advantage of their superiority. Instead, they prefer to trade for new discoveries while shielding themselves from the rest of the galaxy in order to continue investigating in peace.

The Psilon are an intellectual race which value knowledge above all else. The Psilon priority on research and education has been so internalized that it is at the core of their physical evolution they gradually changed over time into the physically weak beings that they are today. They dedicate their entire lives to research and focus their energy on their work, often blinding themselves to the world around them. They are incapable of showing emotion on a biological level.

They have excellent manners and speak in relaxed tones. However, they do not understand the intricacies of nonverbal communication and most social cues, so the Psilons are a somewhat awkward race. Psilons take aptitude tests very early in their development stage that determines what their primary studies will be in life (results come in the form of suggested research specializations). Excellent engineering in Psilon society renders many menial jobs obsolete and delegated to robotic systems. Psilons operate a dictatorship style government called the Quanta, which is ruled over by the Controller.

The Controller's main duty is to manage intergalactic relations and oversee the allocation of government funds to various research facilities. Psilons typically generate revenue by selling access to their trademarks and patents. Top researchers often consult with the Controller on domestic issues. As an exceptionally peaceful and non-confrontation race, the Psilon do not have internal conflict and do not challenge the authority of the Controller. They hide behind their technology in war and will wait to strike until they are positive that they have the technological upper hand. A team of risk analysts serve the Controller to establish the measure of their advantage and minimize risks to Psilon assets.

It takes great skill and patience to play successfully as the hyper-logical Psilons, but they are a long-time fan favorite of Master of Orion players. The Psilons are rational and emotionless creatures who exc el at research and scientific advancements.

They often wait until they have a technological advantage before attacking; war for them is often tinged with sadness, as the obliteration of a less prepared civilization gives them no particular pleasure.

The Quanta looks to the future, secure in the knowledge that their research and advancements will not fail them in the trying times to come. 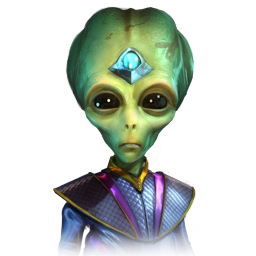 In a race of intellects, the head of the Psilon Quanta must be a true genius. The Controller oversees the Quanta in research, government funding, and galactic issues. The notoriously antisocial and reserved Psilon rely on the Controller toguide them through diplomatic affairs and champion their people in the Galactic Senate. The Controller oversees all technological trades with other races, careful not to reveal too much to any potential enemies. When it comes to challenging decisions, the Controller must rely on intellect alone, for the way of the Psilon is to trust logic, data, and observation.

Don’t let the eccentric airs of Moldred fool you. The advisor to the Controller is brilliant and without peer in his ability to synthesize all the Quanta’s activities across the galaxy. Moldred consults with the top minds in the universe to make decisions and only brings the most sought-after information to the Controller for consideration. If it seems like his mind is elsewhere, that’s because it is everywhere at once.

Kirsus is a colony leader that appeared in Master of Orion II: Battle at Antares, an Psilon Chef Scientist that has left Mentar in the believe that the Psilons are limit their perspective on the universe by only collecting scans and samples, and then study them in their nice and clean laboratories. Kirsus believes that only way to truly advance science is to experience the different perspectives of other races and preform intensive field studies. As Researcher Kirsus helps with further development of new technologies and as a former Chef Scientist he improves the efficacy of our scientists.

The Psilon home world of Mentar is covered in soft, rolling hills and whispering grasses that soothe the racing mind. It has long been ruled by the Psilon, who dominated the passive wildlife with ease and little resistance. It is thought that something in Mentar’s atmosphere effected the development of local fauna, making the population of Mentar far more docile than any other life in the galaxy. Existence on Mentar is peaceful and the Psilon have discovered all there is to know about their home, pushing them to the stars to seek new information.

The capital city of Mentar is Hadron, a sprawling city that houses the home of the Controller and the headquarters of the many Psilon quanta. The Psilon communities revolve around research facilities that serve as the home; workplace; and, essentially, family to the individual Psilon. These research facilities develop the technologies that make the Psilon Quanta powerful, and they all must lobby for resources and funding from the Controller.

As technologies are developed, the Controller utilizes them for the strength of the Quanta. Some are used exc lusively for the advancement of the Psilon’s galactic ambitions, but others are earmarked for trades with other races. It is at the Controller’s discretion to decide which technologies can be traded without giving up the technological upper hand that the Psilon so love to hold over the galaxy.

The Psilon Quanta search across the galaxy, but Mentar will always be home. It is a planet where intellectual discourse reigns supreme and the pen is truly mightier than the sword. All of the universe’s findings and secrets are eventually brought back here, often to be cataloged into the substantial Library of the Controller. It is said that the darkest and oldest secrets of the stars are held deep within, pored over by the greatest minds the universe can offer

The designs of the Psilon ships are simplistic and streamlined in their intentions. They are not the fastest, strongest, or most capable ships in the galaxy, but they are designed to easily integrate new technologies as rapidly as the Psilon can discover them. The Psilon care little for war, except for when their technology can assure them a swift victory.

Destroyer-class ships feature circular panels that can be easily popped out and replaced with other tech. The muted metal of the exterior is simply the finished product of the factory—the Psilon waste no effort in caring about the aesthetic design of the ship. Bravo models are less rounded and feature spiked sensor devices.

The cruisers of the Psilon Quanta are almost disorienting in their flat, featureless design. The modular design with circular panels is carried over from the previous destroyer-class vessels. Cruisers are frequently repurposed as research vessels, as they boast an impressively large cabin area. The bravo model designs are taller, almost conical in shape.

Psilon battleship-class ships boast independently rotating circular panels across the top of the ship, helping distribute damage and moving damaged panels from specific lines of fire. These rotating panels mean that certain sections of the ship can be given a priority ranking, ensuring that undamaged panels are constantly rotated to protect that area.

Psilon Titan Titan-class ships of the Psilon armada are large and thin, leaning heavily towards the disc configuration common among Quanta ships. The core of the ship acts as a hub to the other operations of the titan, housing most crew and research stations.

Titan-class ships of the Psilon armada are large and thin, leaning heavily towards the disc configuration common among Quanta ships. The core of the ship acts as a hub to the other operations of the titan, housing most crew and research stations.

The Psilon traits cost a total of 5 points, a combination that would be legal as a custom race, with five points leftover (10 points maximum), however security -20% is a hidden perk, not normally accessible for custom races.