The Gnolam are a race in Master of Orion.

The Gnolam are one of three new playable races that were introduced in Master of Orion II: Battle at Antares in 1996. Like most races in the MoO Franchise, the Gnolams’ physical appearance undergoes a change with each sequel but their description as a capitalistic dwarf-like people with extraordinary luck stayed the same.

This content was not featured in the original Master of Orion.

The Gnolams are a dwarf-like people from a Low-G home world whose society focuses almost exclusively on monetary gain as a measure of status. As a result, the Gnolams are Fantastic Traders, and thus receive greater benefit from trade treaties and higher than normal income from excess food and trade goods. The capitalistic nature of the Gnolam race is so intense that each unit of Gnolam population generates an additional 1 BC per turn. The Gnolams' Low-G roots put them at a 10% disadvantage in ground combat. To maximize the potential for profit, their government is a business-friendly Dictatorship. Somehow, these lucky creatures always manage to avoid the consequences of random natural disasters.

This content was not featured in Master of Orion 3.

A race of cunning merchants who hold wealth as the primary symbol of status. While they prefer to hire others to fight for them their huge reserve of credits allows them to build a large military quickly. Always seeking new avenues of business the Gnolam have few scruples about where the credits flow from. Bribery, fraud, criminal enterprises and even the occasional poison come naturally to the Gnolam if they cannot obtain the next lucrative deal legally.

The Gnolam League is a tightly knit confederacy of traders based in the Gnol system. The title of Commodore of the League is the highest rank a Gnolam can attain.

Any trader bold or lucky enough may come to hold this highly sought-after position, representing the Gnolams in all official affairs. The League is well-known for its seemingly endless fortune, both in goods and good luck.

Gnolams are cunning merchants and ruthless moneylenders, who would rather pay off an enemy than fight them. However, their vast material wealth usually allows them to fund large fleets at short notice should they feel the need to take the field.

To underestimate the shrewd Gnolam race would be a naïve mistake. While not the brutal warriors or charming diplomats of the universe, the Gnolam are especially gifted when it comes to matters of trade and commerce. Their skills are suited for the shadowy brokers who rule with tendrils of wealth and connection spanning the stars. The Gnolams may humbly pin their success on good luck, but any sharp diplomat knows the Gnolams are clever traders who aggressively pursue favorable economic policies. They are paranoid and cautious about protecting what's theirs, unafraid to use unstable technologies or hire questionable mercenaries to defend their interests. While they revel in wealth and beauty, they are always looking for the next gain. Even as they walk through chambers of gold and dazzling gems, they dream of wealth unseen and treasures untold. Their fantastic wealth has made them the envy of the universe, making them the targets of many raids, yet they continue to persevere. The Gnolams look to the stars and see rolling numbers and yet-unfilled vaults calling their name. 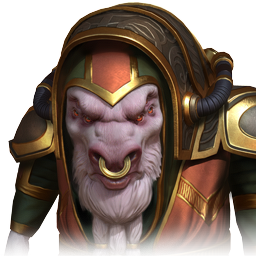 Grogg is a colony leader who appeared in Master of Orion II: Battle at Antares, a Mega-Wealthy Gnolam Financial and Labor expert who left Gnol to expand his business. Grogg is fairly expensive to hire but pays for himself quite rapidly if put in a highly populated system.

The Gnolam traits cost a total of 18 points, a combination that would be illegal as a custom race (10 points maximum).

This article is a stub. You can help Master of Orion Wiki by expanding it.