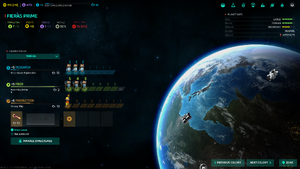 Colonies are the bread and butter of empire management. Each planet can support one colony, and with most systems having between one and three planets, competition for prime spots is fierce. If an empire loses all of its colonies, they are eliminated from the game.

A colony is the basic unit of your empire and managing them properly is crucial to victory. Colonies generate resources such as research points to unlock new technologies, income to fund the expansion of your empire, command points to maintain fleets and so on and so forth. The types of resources generated can be roughly divided into two categories:

The inhabitants of your colony and the laborers who toil for your success make up the population. They are assigned to tiles for producing either of the three resources mentioned above (starting with the most productive), and are the backbone of the empire. The population requires food to grow and sustain itself (every unit of population consumes one unit of food per turn).

The effectiveness of the population is determined by morale. As it drops, more and more workers will go on strike, denying the use of a population unit. These can be shuffled around to ensure productivity in critical areas, but a much better solution is to simply ensure the morale never drops that low.

Another important feature of population is the fact that they generate income, determined by the tax rate and any applicable modifiers (such as those from the planetary stock exchange).