Alkari are one of the major civilizations in Master of Orion.

The Alkari is one of the first ten original races that was introduced within Master of Orion in 1993. While Alkari undergo several changes to their physical appearance with each fallowing sequels, their core identity as a Avian warrior race and the best fighter pilots in the galaxy stayed the same.

The Alkari are descended from large birds and are still capable of limited flight. From an early age Alkari learn to master the subtleties of flight and three dimensional motion. As a result, Alkari make superior pilots: their ships are very difficult to hit and, given equivalent designs, their ships will move before any others except the Mrrshan. Alkari pilots add three levels of defense to any spacecraft they pilot in combat and add +3 to their ship initiatives.

The Alkari are an avian race descended from great flying reptiles. Reared as fliers, Alkari pilots have an almost instinctive grasp of the dynamics of three-dimensional motion. As a result, Alkari ships gain a 40% defensive bonus in space combat. Long ago, the Alkari home world was once a colony of the powerful Orion empire. The ancient artifacts left from that time give their researchers an advantage. The Alkari government is a Dictatorship.

The proud and noble Alkari strike fear within their enemies when their ships cross the sky. The Alkari are leaders and gifted combat specialists respected throughout the universe. As natural aviators, they bring their innate knowledge of flight into battle with confidence. Their rich military tradition has tempered their aggression into an unshakable code of honor in war.

Hailing from the cloudy planet of Altair, the proud Alkari are an old race of Avian Hominids. Although, well known for their peaceful disposition, they are fierce in combat, and will rarely back out of a fight if they believe they have just cause.

The Skylord rules over the Flock uncontested. He is the de facto commander of all Alkari Fleets, crewed by highly skilled and disciplined soldiers. Their pilots are among the finest in the galaxy.

Alkari religion permeates every aspect of their culture, and their zeal can often times be confused with fanaticism.

They believe that the God of Sky created the Alkari to gaze over every horizon, and have been driven into space to fulfil that calling.

The Alkari desire to be the greatest warriors in the galaxy, bringing pride and honor to their family. The Alkari refer to themselves as "one family under the guidance of Gods," referring to the pantheon of gods that Alkari society worships. The pantheon is led by the patriarchal God of Sky, Skree-Ak, often referred to as the Father of Alkari.

The gods resemble the various breeds of Alkari and watch over specific realms of Alkari life. Their home world, Altair, is rich in artifacts due to the ancient and well documented history of the Alkari. However, long before the Alkari were the dominant race on their planet, Altair was a thriving Orion outpost. This contributes to the artifact world status that the Alkari benefit from, but also shows the guiding hand that pushed the Alkari from their earliest evolutionary development. The early centuries of Alkari civilization were dominated by vicious internal warfare between the great families of Altair.

The years of warfare finally ended when the first Skylord united the families of all breeds to create the united Alkari government. The Alkari thrived under his generous dictatorship, witnessing revolutionary boosts in production, technology, and cultural achievements. The Alkari are now a dictatorship-style government called The Flock, which is still ruled over by a highly respected Skylord. The Alkari are a proud race which do not look upon offense with mercy. They are militaristic and noble, but often come to war with other races based on what some would see as minor infractions. Even as an increasing amount of intergalactic conflicts stretch Alkari resources and troops thin, their warrior ways mean that they refuse to back down from a fight.

The avian Alkari, longtime fan favorites and Master of Orion icons, are a militaristic race that will be a good fit for players who plan to battle it out for victory. Courageous and honorable to a fault, the Alkari never see themselves as the villains and always find a way to justify their actions. They fly high on the winds of destiny, confident to the point of arrogance that their lofty stratagems will not fail them in the trying times ahead. 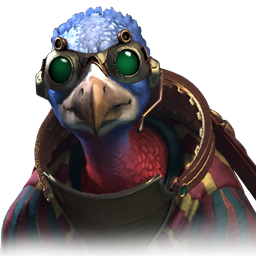 The Skylord is a brave and noble paragon among the honorable Alkari. Skylords are nominated and approved for the dictator-style role by a council of elite families, trade cartels, and religious organizations.

After selection, a Skylord serves for life and is highly respected by the government and Alkari people alike.

The duties of the Skylord include religious oversight, managing galactic trade negotiations, and serving as the supreme commander of the Alkari armed forces

Quail, the eccentric advisor to the Skylord, is a pure scientist at heart. He embodies the adventurous nature of the Alkari in his pursuit of the unknown, plunging fearlessly into scientific inquiry to bring new light to the Alkari domain. The Alkari scientists hold themselves to a high code of moral integrity, and Quail follows in that noble tradition. Quail, a peculiar bird of learning, has earned his role as advisor to the Skylord thanks to his dutiful research and unconventional mind.

Altos is a ship leader that appeared in Master of Orion II: Battle at Antares, a rooky Alkari Fighter Pilot, Helmsman and Navigator with zero experience who looks to become big in the galaxy.

The Alkari home world of Altair is beautiful and rugged, ancient in its knowledge long before the Alkari even took their first flight. Altair boasts an artifact world status due to the presence of Orions on the planet in a time so distant that only scraps and shreds of their civilization can be found in the dust. However, the Alkari are not inclined to keep their beaks in the dirt. They would rather soar in the mild and pleasant skies of Altair, blissfully free of frequent storms or weather patterns that would hinder their flight.

The capital city of Skraa is a revered city built upon a high, rocky plateau surrounded by water. It can only be accessed via flight and is a majestic sight when it comes into view on the golden horizon. The Skylord, his family, the powerful council, and the head of the Alkari Faith are all based in the city by the sea. The buildings are high and spaciously placed, allowing short soaring leaps from building to building to serve as the primary mode of transportation in the city.

Wherever the Alkari soar, Altair will always be where the people return to roost. Altair is rich with the history of the Alkari and the universe itself; a heady mixture of ritual and nostalgia keep the planet close to the hearts of the citizens. They revere their Gods and place their trust in the steadfast hands of the Skylord, who promises to lead them to dominance and salvation.

While nearly all Alkari ships fallows similar designs, like rounded shapes and beak-like fronts are avian in motif, and excessively elaborate aesthetic decorating the hulls. However behind the aesthetic appearance of the vessels, Alkari ships are some of the fastest and most agile ships in the Galaxy.

Due to their Avian ancestry, the Alkari have been blessed with excellent reflexes, almost instinctive grasp of the dynamics of three-dimensional motion and desire for speed. From an early age Alkari learn to master the subtleties of flight and the desire to soar higher and faster than those who came before them has pushed Alkari technological devolvement to created ships built for high-speed and agility.

To say that some Alkari are adrenaline junkies is an understatement, they are also best fighter pilots in the entire Galaxy. Alkari Interceptor pilots are said to able dash and weave through the battle like a graceful dancer, dodging enemy fire and taking down enemy fighters and delivering crippling blow capital ships in blink of a eye. To see an Alkari fly in high-speed Interceptor Fighter is truly sight to behold.

These small ships are nevertheless dignified and powerful agents of the Alkari navy. Their rounded shapes and beak-like fronts are avian in motif, taking inspiration from the Alkari’s innate flight ability. The frigates are small but in the hands of the right pilot they can become a potent force.

The destroyer of the Alkari fleet introduces an aesthetic theme common to all Alpha model Alkari ships of this and larger classes, the distinct two-pronged nose. These commonly seen ships are known as the “gold standard” of military aviation, both for their exc eptional quality and their golden metallic sheen. The Bravo-model ships are rounded and have a unique “halo” silhouette.

The Alkari cruiser is a sleek and modern reincarnation of the early ships that won glory in the Alkari’s domestic wars of the distant past. Beautiful ships, their hulls carry the same signature rounded wing appearance present on all Alpha-model Alkari ships. The Bravo models are boldly distinctive, with rounded segments and a “twilight” color scheme.

The Alkari battleship is workhorse of the fleet, but even though it is expected to give and receive heavy blows in battle, its design retains the trademark Alkari grace and elegance. With greatly improved engines and armament compared to those of her smaller counterparts, the battleship cloaks its deadliness in beauty. The Bravo model ships have a stunning design which calls to mind the rising dawn.

The Titan is a deadly force, golden in its magnificence and peerless when helmed by the exemplary Alkari pilots.

The Alpha models are rounded and layered, bringing to mind gently overlapped wings. The titan-class Alkari ships are angelic in inspiration and devilish in their might.

The crown jewel of the Alkari fleet, the Doomstar is often the last thing that an enemy sees. Brightly illuminated from within, it often harkens the “dawn” of Alkari rule.

The Alkari traits cost a total of 11 points, a combination that would be illegal as a custom race (10 points maximum).